Stop Mealtime Tantrums and Enjoy Your Dinner - Your Kid's Table

Tantrums during meals can leave you feeling drained and frustrated, but there’s a way to stop the cycle and teach your child to come to the table for meals without all the drama! 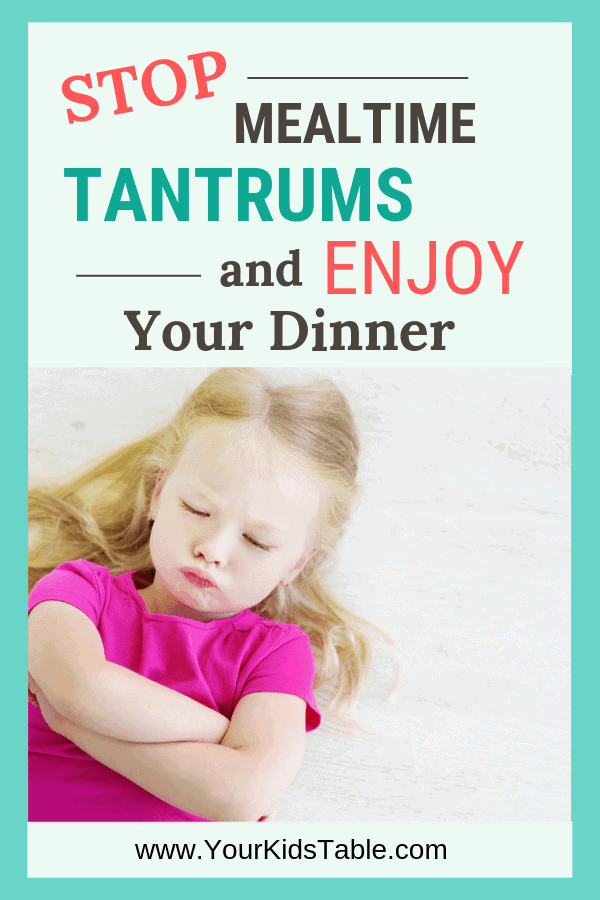 When I talk about picky eating, teaching babies to eat, or simply how to teach your child how to eat well, I always share the advice to eat meals at a table. Sounds simple, but it’s not always easy.

Some kids not only refuse to come to the table, but they have a full out tantrum!

And, tantrums are hard on everybody. If you’re like me, the noise alone just grates on your nerves making it nearly impossible to think straight let alone keep your cool.

Which is why I get asked all the time, “What should I do when I tell my child they have to come to the table and they throw a tantrum disrupting the whole meal?”

Why Do Kids Throw a Tantrum When It’s Time to Eat?

Understanding why our kids throw a tantrum goes a long way in our ability to help them when they’re yelling and throwing themselves on the floor. It helps us be more patient, kind, and set appropriate boundaries. And, why kids tantrum at the dinner table is no exception. These are some of the most common reasons tantrums typically happen before or during a meal:

Eating is hard for them. And, they’re in the fight or flight mode when faced with this challenging task. If they’re tantruming, your child has chosen fight. To understand more head to Why Kids Refuse to Eat, there are 5 big reasons! 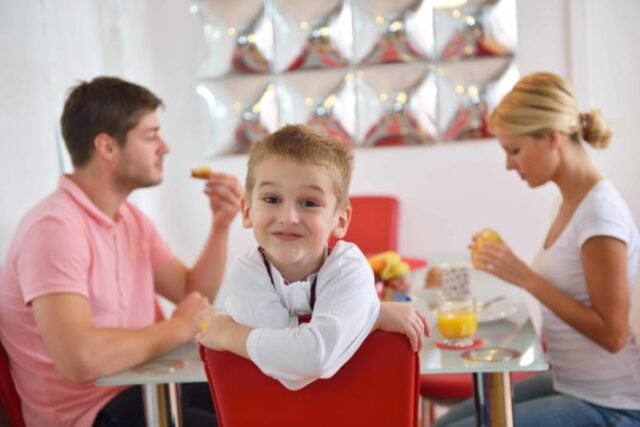 While I mentioned toddlers a bit in the list above, they are in a category all their own because the average toddler (1-3 years old) has a lot of tantrums.

Tantrums absolutely come with the age, but mealtime tantrums often happen with these tots because their attention span is tiny. They live in a chase the shiny object world. Sitting down for a meal and being strapped in can seem like punishment when they have so much to explore!

Besides being busy, toddlers also have irregular appetites, which makes parents crazy. One meal they sit down and eat two plates of food and then they seem to go for days with barely taking more than a bite.

Toddlers growth slows down significantly after the mega accelerated growth that happens as babies. They actually need less calories once they turn 1.

All of these factors make it difficult for a toddler to want to come to the table when it’s time to eat, and their response is a tantrum!

What YOU Should Do When Your Child Tantrums During a Meal

So, what do you do about it? For the average tantrum, you’ll first and foremost want to be calm. Take a minute to discreetly squeeze a pillow or take a few deep breaths, whatever helps YOU!

Then you have two options:

1. Ignore Them: This works best for mild tantrums, and I encourage you to pair this with redirection because just ignoring it will often just stoke the fire. It might look something like this… 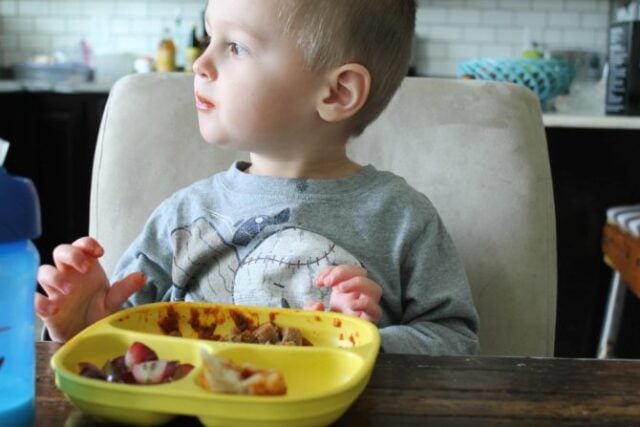 2. Remove Them From the Table or the Room: Calmly tell or help them leave the eating area to another space nearby or to their bedroom. This is not a timeout and shouldn’t be treated as one. Instead, simply tell them that they can come back to the table when they’ve calmed down. If this is a reward for them because they don’t want to be at the table, then say something like, “It’s not okay to yell/whine/scream at the table. Take a minute to calm down, and then come back. It’s your choice if you eat, but coming to the table without yelling isn’t.”

If your child has a hard time with new foods, smells, etc. it’s okay to make some accommodations for them. Maybe the sausage can be moved to the other end of the table? Or, they use a divided plate to eat?

If you suspect this is what’s going on, work with them. Even ask, “What would help you sit at the table calmly with us?” The answer might surprise you and be an excellent solution.

Keep in mind that 30 minutes is the max any child should sit at the table, and 10-15 minutes is appropriate for younger kids if they’re done eating.

Lastly, know that this takes practice. You aren’t always going to get it “right”. That’s okay. You’re trying and that makes a huge difference. Remember tantrums are hard on everyone.

I think it’s even better if you can head off those tantrums though. It’s not always possible, but these 6 tips could prevent a tantrum before it ever get’s started:

It’s important that they have a choice, don’t leave it open ended, like: “What vegetable do you want to eat?” That’s giving them the chance to answer: “none”. How you phrase these questions is key. Also, avoid big choices like, “What do you want to eat for dinner?”  It’s your job to pick what to eat, just make sure there’s one food served that they typically eat! 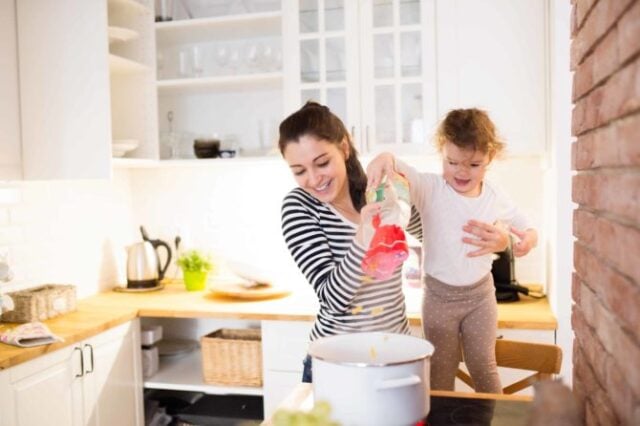 What About Extreme Tantrums?

Very severe tantrums, often called meltdowns, are in a category of their own. Although the 6 tips you learned can help prevent them as well.

Meltdowns are when a child is irrational, flailing, and can’t be talked to. In this instance, you want to keep your child safe and wait for them to deescalate. If possible, move them to another room so they aren’t disrupting the rest of the family.

The middle of a meltdown is not the time to try and teach your child anything. Just support them. This could be giving them space, it could be hugging them, or holding them on your lap and rocking them.

AFTER they’ve calmed down is when it’s time to talk about what they were feeling and some strategies to help prevent it from getting to that level the next time.

Now you’re armed with lots of understanding and quite a few ways to not only deal with tantrums, but how to stop them in their tracks.

Want more strategies to prevent tantrums and help keep your child seated throughout meals? Click here to get this free Keep Your Child Seated printable.

Kid Hate Mealtime? These 7 Tips Will Change Everything

The Best Position for Your Child During Mealtime

Fun Plates, Forks, and Other Cool Stuff that Get Kids to Eat

How to Help Your Child Out of Picky Eating Without Nagging