When Your Kid Says They "Don't Like" a Food, Say This - Your Kid's Table

When Your Kid Says They “Don’t Like” a Food, Say This

Does your kid claim to “not like” many foods? Don’t miss exactly what to say the next time they declare they don’t like a food, it will totally turn the tables on them and even leave them open to trying a new food! 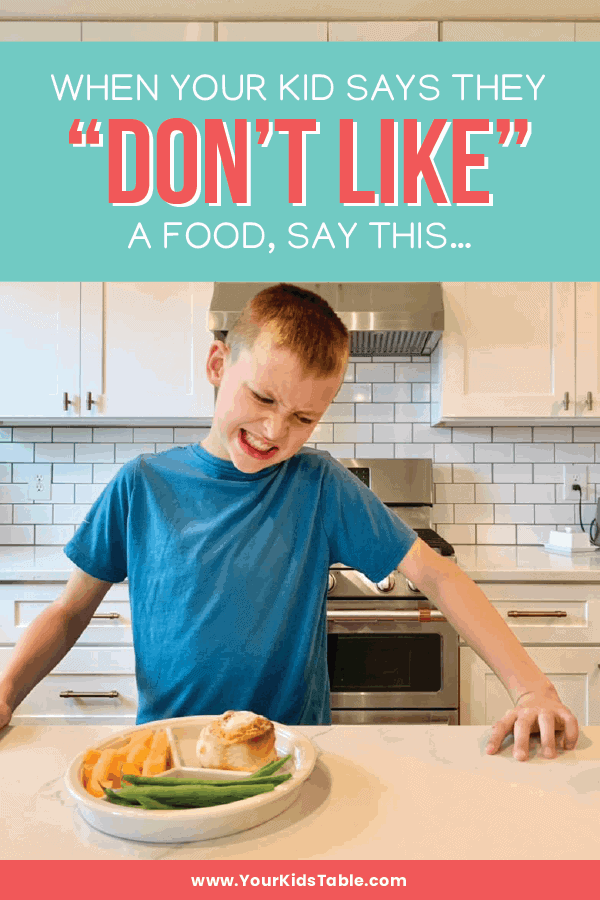 I hear it all the time. A parent begins to tell me that their kid is a picky eater. They don’t know what to do because their child doesn’t like chicken nuggets, hamburgers, grapes, cantaloupe, any veggies, and the list goes on and on.

First of all, if this is you, you’re not alone. Picky eating is a spectrum, and some kids don’t like a few foods and others can’t stand most foods even being near them.

Many kids learn early on to use the “I don’t like ________”  language. I think as parents, part of us respects that. After all, we all have at least a few foods we don’t like.

For example, as much as I’ve tried, I can’t bring myself to like olives. I really want to like them. I’ve tried many times to in my adult life, but something about the flavor and texture is completely off to me. I’m sure you have at least a food or two you feel the same way about. You wouldn’t want anyone to force you to eat it.

Yet, you may have had that experience as a child, being forced to eat a food you couldn’t stand the taste of.

So, when your child says, “I don’t like it,” you feel stuck.

But, there’s a way out of this conundrum. A way to help your child actually learn to eat these new foods, because the truth is, your child may not truly dislike all the foods their claiming not to like. My hunch is that you’ve already suspected that…

Why Does My Kid Dislike So Many Foods?

If your child is only claiming to dislike a few foods and otherwise has a healthy diet, I wouldn’t worry too much about it. Although, the response I’ll teach you in a few minutes can still help them be open to trying and maybe even eating those disliked foods.

The concern is more for picky eaters that say they dislike soooooooooooooo many foods!

Why do picky eaters dislike so many foods?

Well, there’s a lot of reasons. Some picky eating kids have at least one picky eating parent. While kids can observe and then learn these behaviors, I’ve also witnessed parents that hide their picky eating quite well from their kids, yet their child is still picky. That seems to indicate that there’s a genetic link.

Other times, kids have difficulty with the texture of the food. It feels gross or extremely unpleasant. They can’t tolerate it and they gag. This is related to their brain’s sensory processing, thankfully that can be improved!

Still for some kids, they have difficulty chewing food, something we totally take for granted. We call this oral motor skills.

And lastly, some kids have physical pain from food because of reflux, food allergies, and a myriad of other potential issues that can easily go unnoticed.

My point is that if your child has a long list of foods they dislike, it’s important to do some digging and figure out what the cause is, because it’s likely a legitimate one. To learn more, head to 5 Reasons Kids Won’t Eat. 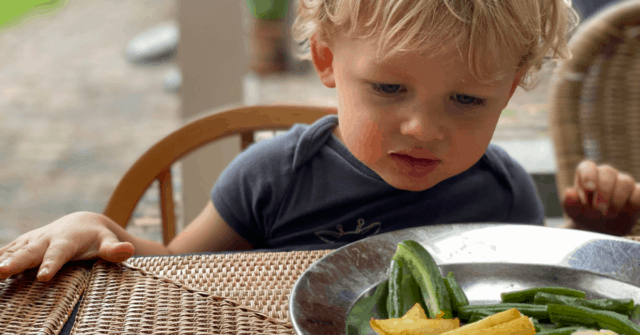 Addressing that underlying cause is so important for truly helping your child learn to eat a variety of foods, BUT in the meantime, what the heck are you supposed to say when you child says:

So often when a child declares that they don’t like a food, they haven’t even tried it. Or, they tried it once. Usually they’re eyeing up the food and have concerns about the texture or color. They are worried they won’t like it and they want to shut down any chance of having to eat it. They’ve learned that when they say they don’t like a food, you back off.

But, you no longer need to let that be the end of the conversation. You don’t have to sigh in exhaustion, because you can reply calmly, even nonchalantly with:

“Well, you don’t know if you really like that food because it takes up to 15 times to know if you truly don’t like a food.”

This is true, and research has proved it. This 2010 study found in 8 or 9 exposures to food, most kids learned to at least tolerate vegetables. We so often miss the opportunity to expose our kids to food again and again. Or, we ask them at any early age after they try a new food: “Do you like it?”

They may have no idea if they like it yet or not, but even asking them the question, sets them up to think in these black and white, like or dislike, views of food when there is a lot of gray area between like and dislike.

While I want my kids to know that they need to try a food at least 15 times before they know if they like it or not, I don’t fixate on that number, counting each attempt, because that puts a lot of pressure on them. And, when kids feel pressured, they don’t eat. To avoid adding pressure, I like to follow up the first statement with:

“It’s your choice if you eat it or not, I’m never going to force you, but you’re not sure if you like it or not yet.”

In the moment is not the time to lecture or say more about it.

Away from a meal could be a great time to talk to your child about how trying foods lots of times helps them get used to the flavor and texture. Tell them they don’t have to decide right away if they like it or not, and if you have an example of a time in your life that you learned to like a new food, share it with them.

Just remember to avoid going into lecture mode. The goal is for this to be a mutual conversation and have your child see you as supportive, not controlling, of their eating. 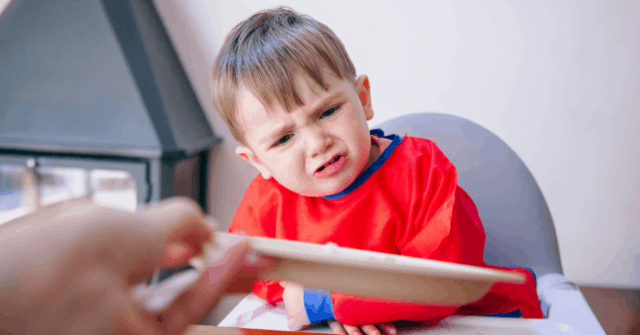 Why They Need to Try Foods 25+ Times

Yes, the research shows 10-12 times of needing to be exposed. I usually say around 15 times because I think picky eaters need more time to get used to food. But, why stop there? Really, the number doesn’t matter at all, I like to pick a big number to show that we’re always open to a new food.

We can model this for our children too.

We all habitually tend to eat the same foods over and over again, this has an affect on our palate. 3 years ago, I changed to a paleo, no dairy or grains diet, for health reasons. My eating changed significantly, and over the following year, I noticed that foods tasted very different to me. I learned to enjoy black coffee for the first time because my palate had expanded. I could now taste bitter foods in a whole new way.

Andrew Zimmerman explains how to acquire taste in this article. He too sites that changing your mindset and being willing to try foods is how you acquire a taste to a particular food. While he’s speaking about adults, I’d argue the same is true for our kids, at least to some extent.

They need our help shifting that mindset, and a great way to begin is nipping the “I don’t like” talk in the bud with “You don’t really know if you like it or not until you’ve tried it 15/25/etc. times.”

When to Accept They Truly Don’t Like a Food…

As I said earlier, we all have foods we truly don’t like. And, if your child only has a few foods they don’t like, then I think you can let it go, especially if they’ve tried it many times. But, I still try to keep the labeling of “disliked foods” to a minimum. Your child’s taste buds have great potential to change and when that happens, you’ll want them to be open to giving the broccoli another try.

But, if your child has a lot of foods they don’t like, then assume they could learn to like any of them. They likely have some other causes of their picky eating and it would be too hard to tease out what they legitimately don’t like.

Instead, focus on foods that are similar to one’s they already eat. For instance, if they like apples, but won’t eat any other fruit because they say they dislike it, I’d serve barely ripe pears regularly because they have a similar texture to the apples, if they aren’t too ripe. 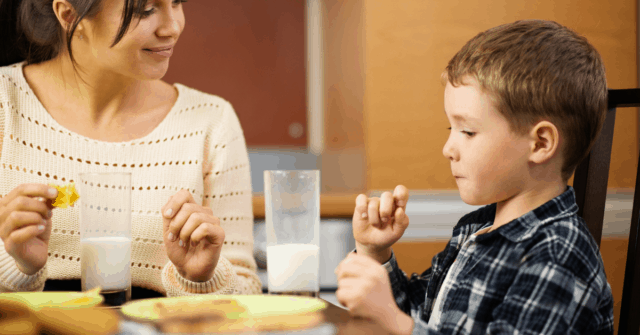 Changing the language around food for a picky eater is important, but there are some other critical keys to make sure you’re using so that your child can learn to enjoy new foods.

Learn more key strategies in our Free 3 Keys to Turn Your Picky Eater Around Workshop. Get your seat here.