3 Signs Your Child is Having a Sensory Meltdown, Not a Tantrum

3 Signs Your Child is Having a Sensory Meltdown, Not a Tantrum 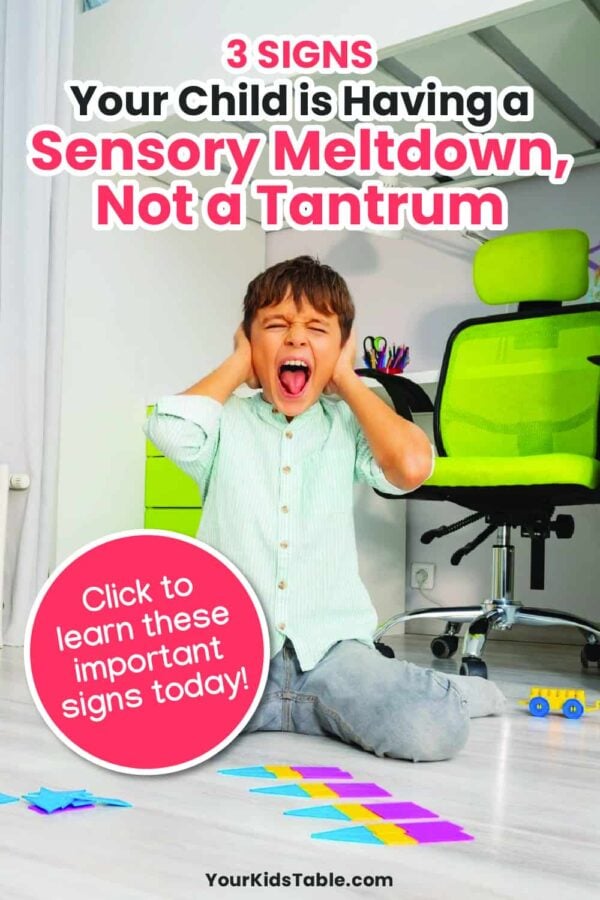 As Sarah lifted her son into the shopping cart she thought…

Maybe it wouldn’t happen this time. I’ll be really quick, and besides, I don’t have a choice, I have to get milk and cough syrup.

But as soon as Sarah pushed the cart into the store, her son started to whine. Not a good sign. She tried talking to him, asking him what was wrong, but he didn’t answer.

She could only hope that the whining wouldn’t escalate as it usually did. She made a bee line for the milk and ran into an old friend she hadn’t see in a while. While she chatted, her son began to rock back and forth and the whining turned more into moaning.

Embarrassed and without an explanation for her son’s behavior, she quickly ended the conversation and made her way to the cough syrup. Except they had moved it and the store was getting more crowded by the second.

At this point, her son began rocking harder, shaking the cart. He was trying to climb out. Sarah tried to remain calm, but he was making a scene and everyone was staring.

Not to mention she had no idea what was really wrong with her son. Was he just acting bad because he didn’t want to be in the store? She tried comforting him. Then, talking firmly. And finally, threatening him with punishments.

None of it mattered, because her son only grew more out of control. He began thrashing in the cart, covering his eyes, and yelling. A few times, he even hit himself in the head. Sarah had no choice but to scoop him up and carry him as he flailed in her arms right out of the store without the milk or cough syrup.

Understandably, Sarah was frustrated, exhausted, and confused by the time she got to the car.

What just happened to her son???

He was having a sensory meltdown. 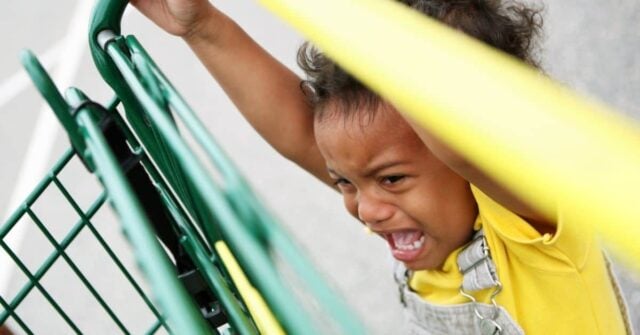 What is a Sensory Meltdown?

A sensory meltdown is when our brain is maxed out on sensations and can’t take anymore. Another way to think of it is sensory overload.

The question is, why did Sarah’s son have a sensory meltdown in the store, but many other kids don’t. Aren’t they experiencing the same sensations?

The answer is that every single child (and adult) experiences sensations a little bit differently, and some kids experience them VERY intensely. For Sarah’s son, he may have been bombarded by the:

While you or I may filter all those sensations out, some kids can’t. This isn’t their fault. It’s because of a specific brain function called sensory processing.

Any child can have a sensory meltdown, but for the average kid, this would take A LOT of intense exposure to a multitude of sensations. For kids with sensory processing difficulties, they’re triggered much more easily.

When their brain can’t take any more sensations, the result is a sensory meltdown.

*Grab our free printable of 21 Sensory Red Flags You Could Be Missing in Your Child HERE!*

How is a Sensory Meltdown Different Than a Tantrum?

A tantrum is the result of a child trying to exercise control or get their way. During a tantrum, they sometimes throw themselves on the floor. They might cry or yell. They may even kick and hit because they’re angry or trying to manipulate the situation in their favor.

They also could be triggered more easily if they’re hungry or tired and crying or tantruming because they need rest or to eat.

Tantrums of course are not a result of your child being “bad,” there is a reason for those too.

A sensory meltdown is something a child can’t control. During a meltdown caused by sensory overload a child may:

If your child has ever experienced a sensory meltdown, you know how utterly heartbreaking and scary it is.

What’s worse though is that often the more you try to help by talking to your child, the more out of control they seem to become. Onlookers, friends, and family can’t understand this seemingly dramatic behavior and commonly suggest the child needs disciplined differently.

Parents and the public at large just aren’t taught about sensory processing (that’s part of our mission here at Your Kid’s Table), and so the only explanation is behavior. Because that’s what most people understand.

But, that couldn’t be further from the truth. 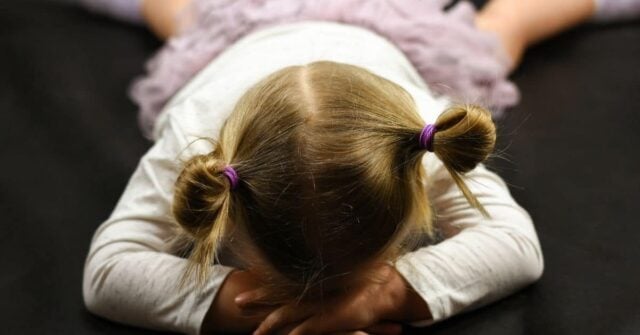 #1. You can’t communicate with them

When a child is having a sensory meltdown, they are almost unreachable. They’ve actually moved into a fight or flight response. Sensory overload triggers the brain to move into fight or flight. Hence the violent (fight) actions or fleeing (flight) you see your child doing.

Once the brain reaches fight or flight, it’s in a different mode, completely incapable of rational thought. Adrenalin is flooding their body and they’re operating from a place of literally trying to save their life, even though they may be in no danger in the middle of your living room or the local Target. The brain doesn’t know that now and it doesn’t care.

It felt threatened from the overload of sensations and is responding with a sensory meltdown to protect itself.

When your child is having a tantrum, they may be screaming at you, but you can get their attention. They may be stubborn, but they can understand what you’re saying. In fact, you might even be yelling back and forth with your child during a tantrum. That would never happen during a sensory meltdown.

#2. They aren’t trying to get something

A tantrum is always the result of a child not getting their way. They want to stay up later, have another cookie, get the new toy, or go with dad on that errand. They were told no and now they’re tantruming. A sensory meltdown often seems to come out of nowhere (although there are signs, more on that in a minute).

Sensory meltdowns can build gradually, but it has nothing to do with whether they were allowed to get a milkshake or not while you were picking up dinner in the drive thru lane.

If you’re ever questioning if your child is having a tantrum or a meltdown, ask yourself if they’re trying get something as a result of their actions. If it’s a sensory meltdown, the answer is always, no.

One of the challenges about a child having a sensory meltdown is understanding the cause. Often kids, even verbal older kids, can’t or aren’t able to put into words that it’s too loud, bright, or that it hurts when people keep bumping into them in a crowded space.

However, sometimes your child can give you signs before and during the sensory meltdown. For instance, your kid might squint or keep trying to cover their eyes. They may gasp and start to whimper when somebody accidentally bumps into them.

Or, they may look like they’re on guard cautiously stepping away from everyone because they’re desperately trying to avoid getting bumped into.

Think back about your child’s sensory meltdowns, were their any clues in advance?

Sometimes there isn’t. In that case, you’ll need to think about other sensations in their life they don’t like. If your child hates riding the swing, movement might be difficult for them. Movement like riding backwards in a shopping cart could make them feel car sick OR extremely insecure and dizzy.

That’s just one example though, here are some other causes of sensory meltdowns…

Causes of a sensory meltdown:

The best way to figure out the cause of your child’s sensory meltdowns though is to ask them when they’re calm, if they’re verbal, why they got so upset. Don’t underestimate young children answering this question, all they need is a little bit of language to be able to communicate what could be causing their sensory meltdowns.

Bottom line, if you can connect your child’s actions to sensitivity to one or more sensations, then it’s most likely your child is having a sensory meltdown. 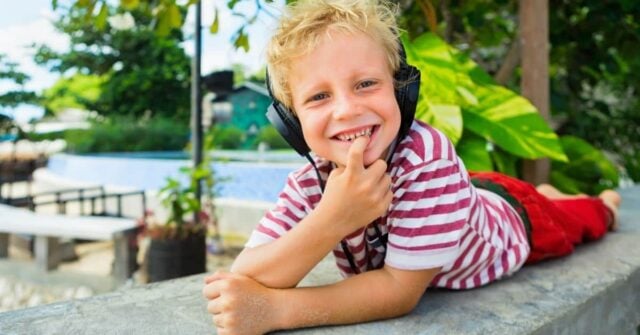 What To Do When Your Child is Having a Sensory Meltdown

The best way to help your child when they’re having a sensory meltdown is to make sure they’re safe and then remove the sensation that’s bothering them.

That usually means leaving the store/public setting or going to a quiet room at school/home. If you know the bright, fast moving tv show your other child was watching is contributing to or causing the meltdown, turn it off or help your child get to another room.

If you aren’t sure, try to get them to a quiet dimly lit space without any strong smells, lights, or sounds.

If they’ll allow you, hold them very tightly. Some kids will respond well to some slow rocking, but for other kids, it’s more sensory input and it will only make the meltdown worse.

In our RISE with Sensory program, students learn how to help their child in the middle of a tantrum, but also how to prevent it. You can prevent a meltdown by giving your child supports like wearing noise cancelling headphones if noises are the cause of their sensory meltdowns.

Or, maybe they wear a hat to block out bright lights, or sunglasses!

But, as an occupational therapist, something I focus on is actually decreasing their sensitivities with specific activities. Basically, a child’s sensory processing can improve for touch, movement (vestibular), and even the smell senses. This technique is called desensitization.

Desensitization takes time because you take small incremental steps to help your child slowly learn to tolerate new textures, smells, and movement. Once that happens, those sensations aren’t triggers for a sensory meltdown any longer.

With this approach, you’re getting to the root of the problem!

To learn more, get a seat in my free workshop: 3 Expert Secrets to Calm and Focus Kids with Sensory Activities!

3 Rumors About Kids With Sensory Issues That Aren’t True!

How to Identify Sensory Issues in Toddlers