Why Some Kids Gag and Throw Up When They Eat or Even Look at Food!

Why Some Kids Gag and Throw Up When They Eat or Even Look at Food!

Does your kid gag or throw up when they look at, touch, or taste a new or different food? It seems odd and is worrisome, but it’s critical to understand why your child is gagging/vomiting and how you can help them! 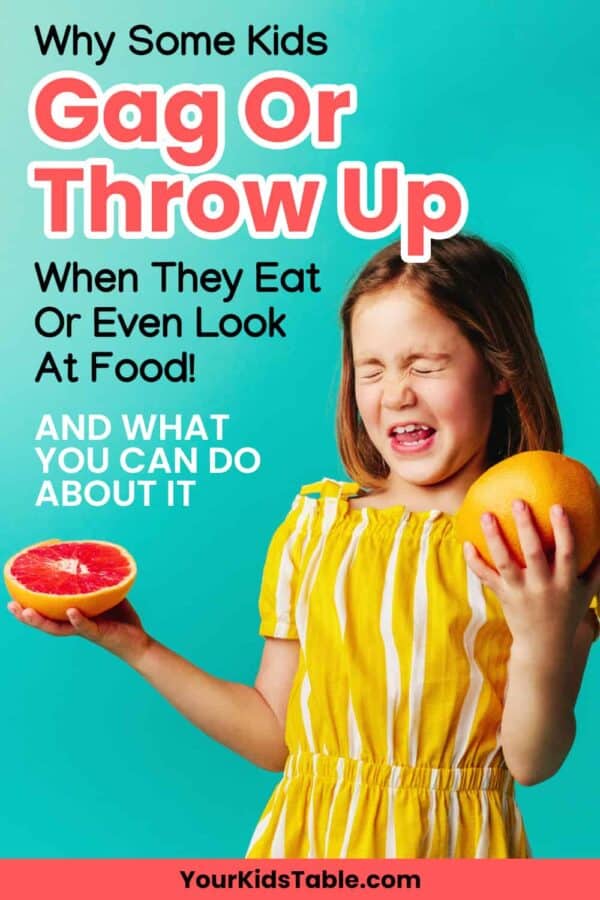 Your heart skips a beat when you see your child gag.

Are they going to throw up?

You rush to their side to figure out what’s going on, but it’s unclear why they’re gagging or even throwing up. As parents, we tend to worry that they’re choking (or sick if they’ve gagged because they looked at a food).

You worry because you don’t expect your child to gag because they looked at, touched, or tasted a food.

Yet, as your child continues to gag and/or vomit on a regular basis, you realize they aren’t sick. They aren’t choking.

So what’s going on?

Why Some Kids Gag When They See, Touch, or Eat Foods: Food Texture Sensitivity

Some kids are disgusted to the point of gagging because of the texture of the food. Let me try to give you an example, if someone put a plate full of roasted crickets down in front of you, how would you react?

Would you turn your head? Wince?

What if you had to pick one up and take a bite? Would you gag?

Even though many people in some parts of the world devour crickets, in other places, like here in America, it’s extremely foreign. As you would eat the cricket, the texture and smell might be an assault to your senses.

You’d likely be afraid of what it’s going to taste and feel like in your mouth. Then, your adrenalin kicks in and you gag

But, the same process is happening.

For a variety of reasons that nobody is 100% sure of, some kids are perceiving everyday textures as uncomfortable, disgusting, or even painful. This is not a choice they’re making, it’s how their brain is wired.

That wiring is called sensory processing, and if your child’s brain is saying “Oh, that looks/feels/tastes awful,” then, a child can gag.

Once they start to gag repeatedly, it can become a learned response or habit they don’t trigger on purpose, but their body does automatically.

*If you have a baby or young toddler that’s gagging often, they could be gagging because of poor oral motor skills as well. Check out What You Need to Know About Baby Gagging. 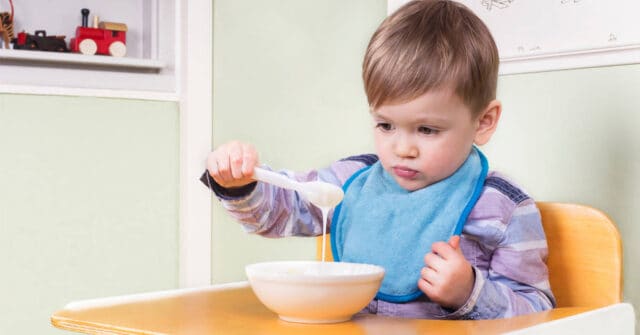 My Kid Actually Throws Up! Is That Food Texture Sensitivity Too?

For kids that actually throw up when looking at, touching, or tasting a food, they’re also likely experiencing a food texture sensitivity. This could happen because they have a sensitive gag reflex that’s in the back of their throat.

They gag, the reflex is easily triggered, and here comes the vomit in a seconds time.

Or, they may gag severely because the texture is extremely intense and so off-putting that they throw up.

Again, once a child throws up because of a sensitivity to textures a few times, it can become an automatic and quick response anytime there is a slight discomfort with an texture of food.

However, if your child is throwing up with any regularity, it’s important to talk to their doctor, and possibly see a pediatric GI doc to make sure that they don’t have acid reflux, food sensitivities/allergies, [gluten free with a picky eater] or any other medical reason for vomiting on a regular basis.

As kids move into their teen years, gagging and throwing up become embarrassing. Most will learn to control it to some degree. Some won’t.

But, even if a child is able to control the gagging or vomiting, they’re likely to continue with an extremely selective diet because they want to try and avoid their gagging/vomiting as much as possible.

In an effort to avoid the unpleasant texture of food, they may refuse to have foods they don’t typically eat on their plate or even on the table. They may even refuse to sit at the table while everyone else is eating. They’ll end up eating alone or at a different time than other family members. 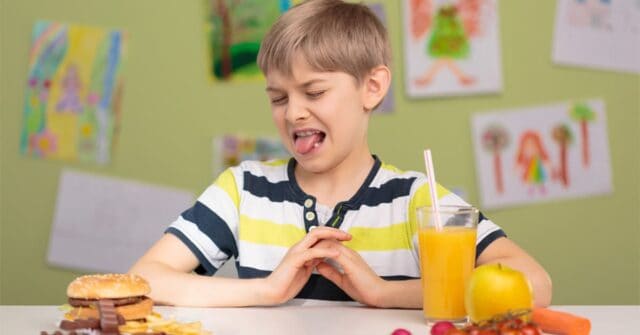 Kids Can Decrease or Eliminate Their Food Texture Sensitivities

That’s why it’s really important to address the food texture sensitivity. Your child can participate in specific sensory activities for eating that help to make new connections in their brain so they become desensitized to various textures.

It’s not a change that happens overnight. It takes some time for new connections in the brain to be established. But, with consistency, parents in our picky eating program, Mealtime Works, see results in as little as 2-3 weeks.

The longer and more consistent the sensory activities are used, the bigger and longer lasting the changes are.

Kerry-Ann is a Mealtime Works student that focused on desensitizing with her daughter Chloe, which resulted in:

“This week alone she has eaten the following NEW foods: jelly, sultanas, homemade pizza (previously only ate Dominos), apple cake, snake lollies, she nibbled on a pancake, and ate a new type of sausage at a family bbq!!!” – Kerry-Ann

That’s massive improvement for this Aussie little girl who was struggling to eat more than 20 foods consistently!

Other Signs Your Child May Have Food Texture Sensitivities

If your child has a sensitivity to specific textures of food you may also see: 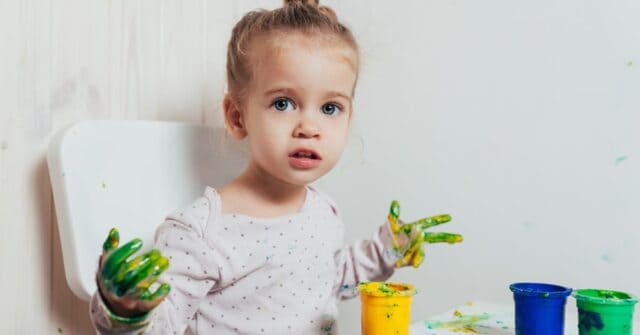 In the moment when your child is gagging, the best thing you can do is to remain calm, acting like it’s not a big deal. I like to redirect kids when it’s obvious they’re gagging because of the texture of a food to a different action. I’ll directly, with an even tone, say:

If they’re gagging severely while still using the above ideas, you can also give them some deep pressure input.

Deep pressure is a sensory activity that usually calms and grounds the sensory system. There are lots of ways to give deep pressure, but in the middle of a meal, you can:

If your child is actually throwing up, you still want to stay calm and help them get cleaned up as quickly as possible, disturbing the meal as little as possible.

I know it’s upsetting to see your child throw up, especially when the cause is a sensitivity to food texture, but the more attention you give to it, whether it’s from a source of worry or frustration, the bigger it will make the problem.

If they’re throwing up on a regular basis, it’s really helpful to minimize attention to vomiting by having a large cup at the table that they can throw up into. Yes, I also know how unusual and gross that might sound, but this will help keep your level of interaction during the vomiting to a minimum and be far less disruptive to anyone else eating.

You can also teach your child to grab the cup and turn away from the table while vomiting, then dump the cup in the toilet, and come back to the table on their own.

While the first step is managing the gagging and throwing up at the table, I’m not suggesting that’s all you do to help your child. As I mentioned earlier, it’s also important to work on desensitizing and addressing their eating difficulties from all sides.

I believe this all boils down to 5 steps. Next week, I’m teaching what those are in our once-a-year free event, and I hope you grab a spot because what you’ll learn can drastically change the way your child eats! 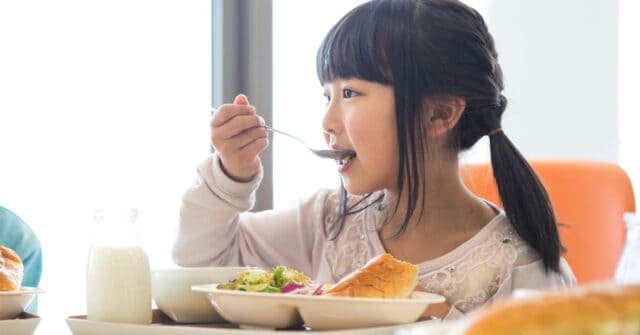 Grab a Spot in the Free 3 Keys to Turn Picky Eating Around Workshop: Perfect for Kid’s with Food Sensitivities

This free workshop you will learn key components to helping your kid conquer their extreme picky eating so that meals can be enjoyable instead of a battleground. And, so that your child can learn to eat new foods and stop gagging and throwing up.