How to Handle Dessert with Picky Eaters - Your Kid's Table

How to Handle Dessert with Picky Eaters

Learn how to handle dessert with picky eaters in a way that teaches them to have a healthy relationship with all types of food. Healthy dessert ideas for picky eaters, too!

Mom, “Can I have dessert?”  “Only if you finish your dinner.”

How many times did you hear that as a kid. My guess is, a lot. Collectively, as a generation, our parents used dessert to motivate us to eat every bite of our chicken, finish our milk, and eat the cold broccoli that had barely been touched. The general consensus was that this simple trick worked, and whatever is broken doesn’t need fixed.

While using dessert as a reward or a bribe didn’t seem to have any adverse affects on the surface, I think we sometimes miss the possible longer term results.

Most of us look to food, particularly sweets, when we’ve had a bad day, need some cheering up, or because we just got a promotion. We were innocently and unknowingly conditioned to immediately associate a treat with successes and to make us feel better. Many adults that have struggled with over-eating and weight gain strongly identify with these feelings.

I share this story because it’s one of the things I want you to keep in mind as I dive deeper into explaining the power of dessert and why it’s even more important to know when and why we should serve it (if at all) to picky eaters, not to mention kids in general. Keep a look out for a list of dessert ideas for kids at the end, too!

Since most of us were raised with dessert as a reward for a well-eaten meal, it’s only natural that we repeat what seems to have worked with our own kids, especially when they’re picky eaters and we just want them to eat.

Being a parent of a picky eater can be downright stressful, not only do you hear the well-meaning, but often judgmental, comments from everyone around you… you also worry that your child isn’t eating enough. That they aren’t getting nutrition. My response when I get worried about something is to try and control the situation. Can you relate?

With picky eating we threaten, lecture, and even beg our kids to eat. Often feeling like, “I’ll do anything, just take a bite.” So, who cares if a picky eater eats their dinner because they get ice cream, cake, or cookies?

Learn more about being patient over at Dealing with Picky Eaters (because believe me, I’ve been there!)

Well, as tempting is it to get the short term win of an eaten meal, in the long run we’re accidentally reinforcing that the food that’s on their dinner plate really isn’t as good as the dessert. It sends the message that the food during the meal is something that just has to be endured to get the real prize. And, I think most of us want our kids to desire and enjoy a large variety of foods, not just sweets. Read about the Best Picky Eating Tip for more on using rewards and bribes to get kids to eat.

The other issue with only giving dessert if your child finishes their meal or eats a certain number of bites is that it doesn’t work.

If your child is an extreme picky eater, meaning they are super particular about their foods and have a very limited variety, then using dessert simply doesn’t motivate them anyways because eating is so challenging for them. It’s like that bite of chicken is no way worth the scoop of ice cream they’re going to get, and so they just pass on it anyways. Head over to 10 Extreme Picky Eating Red Flags to learn more.

Avoid This and You’re Golden…

Do you see where I’m going with this? If you’ve been using dessert as a reward for eating a meal, it can be scary and overwhelming to stop. I get that. If you find yourself needing a little extra motivation, think about the long-term benefits, as your child will have a healthier relationship with foods throughout their life.

If and when picky eaters should get dessert is one of the most popular questions I get asked. As a feeding therapist and in my own kitchen with my own three kids, I follow two guidelines when it’s time to serve dessert:

If you follow these two rules, you’re setting up healthy boundaries that will serve them well throughout their life.

Should Picky Eaters Even Get Dessert?

Some will argue that picky eaters aren’t eating well and allowing them to have sugar is only going to make the problem worse. And, honestly, there’s some truth to that statement, but if we withhold or never give picky eaters (or any child) an opportunity to have desserts and sweets, then we’re often sabotaging our best intentions.

Remember being a kid and a brother or sister telling you not to touch something, that it wasn’t yours, to keep off! Even if you weren’t interested in their cherished treasure they wanted to hoard, didn’t the announcement that you couldn’t have it just make you want it more?

When we level the playing field and don’t give dessert so much power, it often isn’t as big of a deal, and the desire to have it all the time at least decreases. So, while it may seem counterproductive to go ahead and give your child dessert when they ate little or none of their meal, it’s actually a really good thing because you’re not labeling foods as good or bad. Better or worse.

That’s not to say that there isn’t a place for education on nutrition! Head over to Is My Picky Eater Healthy to learn more.

To be crystal clear, the answer to, “Should picky eaters get dessert when they don’t eat well,” is: YES. Yes, they should still get dessert.

3 Ways to Give Picky Eaters Dessert

I know the idea of bringing a tray of cookies to the table right after your child hasn’t eaten any of their dinner is a little difficult to swallow (yes, I just used that pun!) And, that makes total sense. There are actually three different ways that you can choose to give your child dessert, as long as you’re avoiding the two golden rules (not rewarding or bribing with it).

1.Serve dessert at the same time as dinner

This is how Ellyn Satter, creator of the Division of Responsibility (DOR) recommends serving dessert. Obviously, most children are going to eat the dessert first, but she argues that they will learn to moderate themselves as the dessert isn’t being held as a special food any longer. Again, because of leveling the playing field, the dessert, over-time, won’t even be desired as much. For some kids, it can take a while to get to this point. If you don’t want them to have large quantities of the dessert, only put out a small serving. When it’s gone, it’s gone.

If you don’t want or need to have dessert every night, it’s fine to just occasionally have dessert without any plan in place, as long as your child doesn’t pick up on a pattern that they only get it when they eat a big dinner. This is how we handle dessert in my house. My children will ask sometimes, and there are times I say yes, and times I say no.

If the answer is no, sometimes I will give a neutral answer like, “We don’t have enough time tonight.”  Or, “We’re not going to have any dessert tonight, but maybe tomorrow.” I’m careful to not say, “No, you didn’t eat a good dinner.”

3. Have dessert as an evening snack

If you’re a family that enjoys having dessert every night, or wants peace of mind that you child isn’t “too hungry” when they go to bed if dinner isn’t their best meal, then serving dessert as a regular evening snack may be a good option for you. One factor that you want to be careful of is having dessert too close to dinner, as some children will not eat as well when they know that dessert is right around the corner.

It’s best to have dessert about 2 hours later. Also, you’ll want to regularly include some other elements like fruit, nuts, etc., as options. For instance, if you’re serving ice-cream, put out nuts and sliced bananas as toppings. Lastly, you can also include lots of “healthier” dessert options that can make both you and your child feel good about dessert.

Every family is different and some like to eat dessert every night, others on occasion. All of that is good!

Which one do you think you’ll try (tell me in the comments, I’d love to hear!) 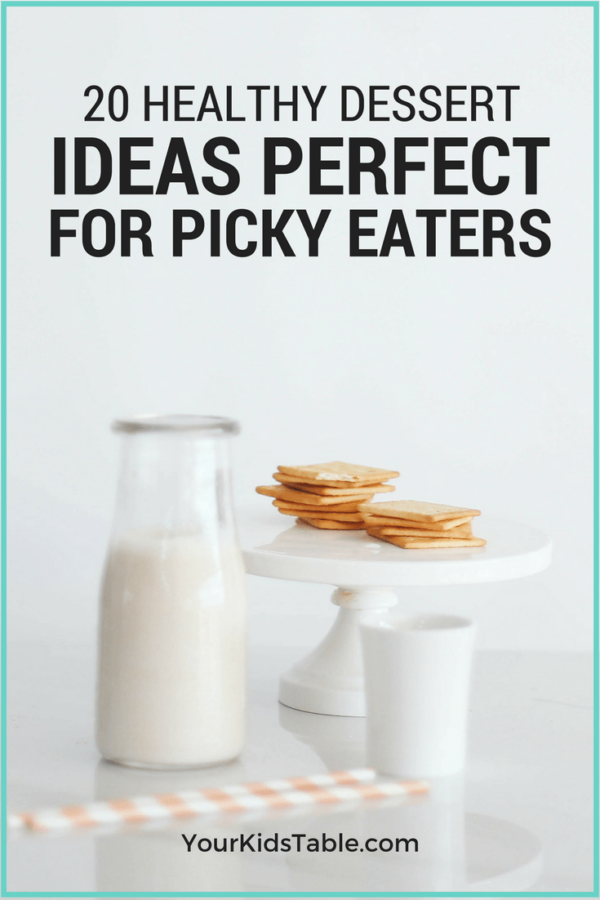 Check out these simple desserts with a healthy twist to try serving as “dessert”:

Learn How to Help Your Picky Eater

Want to learn more? Join me in the 3 Keys to Finally Turn Picky Eating Around. You’ll learn the most powerful and simple strategies that are a must for picky eaters from mild to extreme.

More on Dealing with Picky Eaters

Picky Eater Tip: Expand on What Your Kid is Already Eating

Does Your Picky Eater Need Vitamins?

Did You Pin This?

Hover over any picture or click on it and the “Pin it” button will pop up for you!