Picky eaters can have a big influence on their brothers and sisters at the dinner table. Learn 4 ways to prevent siblings from falling into the same picky eating habits! 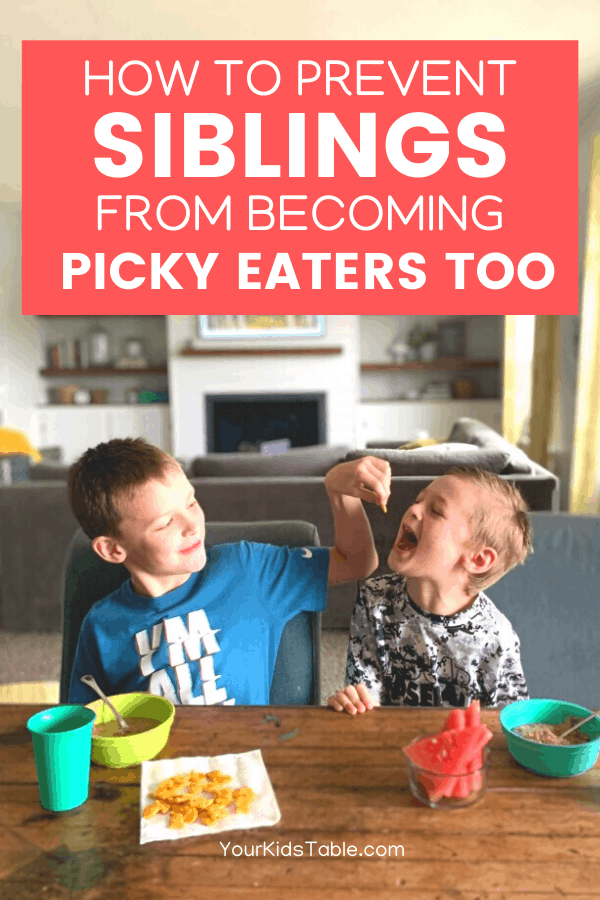 If you’ve already got one picky eating kid in the family, the last thing you want is 2 or 3 of them. You know how frustrating and exhausting it is feeding a picky eater day in and day out. You also know how your picky eater acts at the table.

They will only eat “their foods”.

They tend to make negative comments like, “your food smells gross.”

And, they might flip out if you suggest they try a bite of something new.

It’s a legitimate concern that your other kids will follow suit. I’ve witnessed it play out that way for some families.

What can you do to prevent that from happening at your dinner table? That’s what I’m sharing with you. Follow the tips, tweaks to your routine, and picky eating strategies below to not only help your other children avoid becoming picky eaters themselves, but also to help your picky eater learn to eat better too!

Picky Eating Can Be Genetic

A lot of parents blame themselves for their child’s picky eating. And, while picky eating can inadvertently get worse with some common bad advice that’s floating around out there, parents rarely cause picky eating.

Instead, it’s more likely that there’s a root cause that’s making it difficult for your child to eat other foods, that has nothing to do with your parenting.

That root cause, whether it’s a sensitivity to textures/flavors, or acid reflux, can be genetic. To be clear, picky eating is not always genetic. But, it’s not at all uncommon for parents to tell me, as their occupational therapist, that one or both parents are or were also picky.

Get some tips for adult picky eaters.

My point is, that if there’s a genetic component to your child’s picky eating, it’s possible that multiple children can be prone to picky eating. If that’s the case, the following tips will still be a help, but your picky eater may not have caused his brother or sister to be a picky eater, too.

Picky Eating is a Common Phase for Toddlers

And, even with your best efforts, most toddler between 1-2 years old will begin a picky eating phase that can last for a few years. But, and this is a big BUT, typical toddler phase picky eating is not extreme.

Toddlers in the typical phase of picky eating will usually eat more than 25 foods in their diet. They aren’t particular about brands, shapes, or color of food. They tend to love all the kid favorites like chicken nuggets, mac and cheese, pizza, and PB and J. They have some fruits and maybe a veggie or two in their diet.

If your child happens to be a toddler, and has signs of more extreme picky eating, then they’ll likely need some help before they grow out of it. If you aren’t sure what type of picky eater your child is, take the picky eating test!

Again, my point is that even with your best efforts, a sibling of your picky eater can still go through a typical picky eating stage when they’re a toddler. 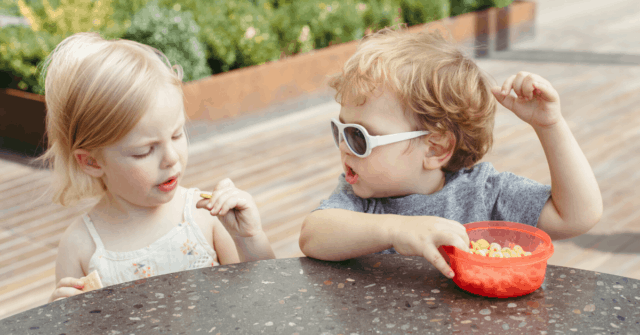 How to Prevent Siblings from Becoming Picky Eaters, Too!

It may seem like you have zero control over meals when you’ve got a picky eater, but there’s key strategies you can use to have a structure to your meal that benefit your picky eater and their siblings too. To help prevent siblings from picking up the picky eating habit, try these 4 tips and tools:

Labeling is a coping strategy. It’s in our human nature to label what we don’t understand. If you don’t understand why your child only wants to eat the same 5 foods repeatedly, you’ll likely call him a picky eater. But, if your child hears that label, they will live up to it.

AND, your “picky eater’s” siblings will take note of the extra attention they get as a result of this label, even if it is negative attention. Kids don’t care, they’ll often take any kind of attention that’s available.

It’s frustrating when our kids don’t eat a meal we worked hard to prepare. Sometimes comments like these slip out of our mouth before we realize it. The venting is hard to control, but it doesn’t help picky eaters, in fact it makes it worse. And, as siblings hear the words, they see the control their child has over you and they’re likely to decide they’d like a little of that control too!

Typically these comments are said when another adult offers your child food at a party or restaurant. I also hear it when a picky eater shows a sudden interest in a food at the grocery story or a restaurant.

The parent knows their kid isn’t going to eat it, so why bother?

But, not giving them the chance and following up with a comment like this one just deepens the picky eating mentality, and your other children will notice and adopt these limitations too.

Of course, we all have food preferences, I’ve never met anyone that willingly eats and enjoys every single food in their culture. Even the most varied eaters have a few foods they’d rather skip. When you’ve got a picky eater in the house, you want to avoid calling out your food dislikes though.

It gives them an example to follow, and you’ll soon hear them listing all the foods they don’t like on a regular basis. That kind of talk will continue to spread to siblings too. And, once a child declares they don’t like something, they’ve mentally blocked off the food, usually before knowing if they really like the food or not. 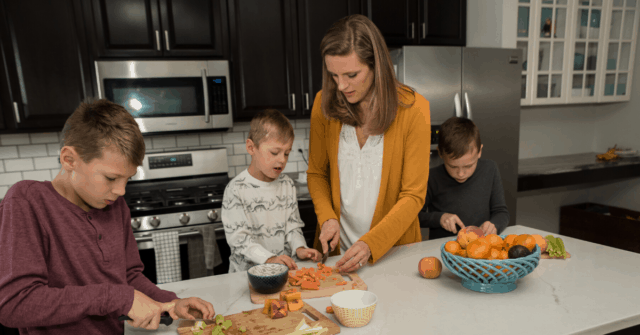 It’s common for parents of picky eaters to simply serve them the food their willing to eat. They get their own meal, sometimes at the family dinner table with everybody else eating something different, and sometimes they eat when and where they want.

I get how real the picking eating tantrums are. I know it can be a fight to get your child to the table, to eat a dinner at the same time as you, or have different food on their plate, but it’s worth it.

It’s critical that a picky eater learns to eat new foods. But, as far as siblings are concerned, if they see their brother or sister getting to eat the same foods, often snack foods or carbs all the time, they’re going to want the same.

If you’ve been here for any length of time, you know that I firmly believe that picky eaters should ALWAYS have something on the table that they typically eat. But, there should be other foods too, that the rest of the family is eating. Ideally, on their plate, but you may have to work your way up to that. So serve 1-2 of the foods they usually eat, but avoid giving them a separate plate of food that you announce is “their food”.

As much as possible, you want to help them get away from the mentality that they have food that’s different from yours or the rest of the family for their sake and so that siblings don’t observe and try to adopt this too. 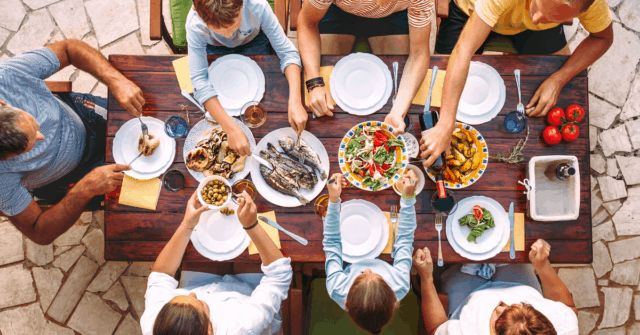 This works with in hand with step #2. Serving foods family style helps your picky eater get used to interacting with foods they refuse to eat, but it helps siblings see all the food being passed around the table and that there’s an expectation that everyone take some.

This is a key strategy in helping siblings avoiding picky eating!

As long as there aren’t many comments about what the picky eater is or is not eating, the sibling tends to just go about eating the food that’s in front of them.

It seems fair to the sibling, and as though everyone is eating the same thing.

Sometimes picky eaters are very verbal about not wanting to have any given food on their plate let alone near them. They may gripe, tantrum, or refuse to take any food when it’s passed to them.

Next thing you know, your child is flipping out and their sibling is taking the whole scene in.

Following tip #1 will help minimize this, but you’ll also want to use any of the these tools to nix negative talk about food for good:

After you’ve addressed the negative talk, you may need to redirect the conversation. It could be to anything. Like, “What did you do in art class today?” Or, “Tell me about what happened on Paw Patrol.” Or, “What’s the first thing you’d like to do when we get to the park after lunch?”

Just change the subject away from food, while your picky eater cools down.

If your kid is verbal, and older than 2, you can have a conversation with them away from mealtime about how to speak about food. Keep it light and appropriate for your child’s age. Ask them if they can help you say only nice things about food or nothing at all, because it could hurt others feelings or make them not want to eat.

You can also come up with a signal together.

Maybe your daughter gives you a thumbs up if she’s uncomfortable with something on her plate, or squeezes your hand. Another idea is to have a simple phrase that she says instead like, “I need help with my food.”  That could indicate that she’s unhappy about something on her plate or near her, and let’s you know to help her figure out a solution before the situation escalates.

Sometimes, when its a quick comment, particularly if you don’t think their brother or sister heard it, the best choice is just to ignore it. Picky eaters will make comments at times to get a reaction. When they see you aren’t bothered, it can help stop the negative talk.

Stopping the negative talk about food is important for siblings because they hear and often absorb everything their picky eating sibling says. This is a big way that they can become picky eaters too.

Now you’ve got 4 ways to help prevent your other children from becoming a picky eater too! If you’re looking for more help for picky eaters, grab our free printable Picky Eater Meal Ideas to get some helpful inspiration of meals you can make for the whole family.

If you’ve got an extreme picky eater that only eats a few foods, this printable gives you the foods I’ve found to be the most effective to work towards your child eating!