It might seem strange, but it’s common for picky eaters to eat only white or beige foods and refuse most other colors of food. But, there’s a good reason why and ways to get them eating more colors of the rainbow…

Jade was ecstatic, her daughter was an extreme picky eater. That meant she had a very limited amount of foods she’d eat at any given time and was prone to getting quite upset if there were any new or different foods on her plate.

As a Mealtime Works student, Jade was working on strategically expanding her daughter’s variety, so we were brainstorming what other foods she could start to offer now that her daughter was loving this roasted chicken.

Jade said something to me that jumped out as a clue. She said the chicken was on the bone and her daughter liked pulling shreds off of it (definitely a sensory connection there).

My first thought was to try other types of roasted meats. Maybe a pot roast, without any gravy, that she could also pull shreds of meat off of.

But, Jade wisely said, “I don’t think she’ll go for that just yet because she doesn’t eat any foods that aren’t white. She’ll immediately notice the dark brown of the beef, and likely refuse it.”

Of course, for some picky eaters, color of food is a big deal!

We often don’t think about food color. You might not even notice that your child is choosing only certain colors of foods, especially if they’re younger. But it’s something I teach my students to be on the look out for, because it can’t be ignored. Jade had notified the pattern, but her daughter, at the age of 7 had begun to verbalize it too.

If your child is 3, they likely won’t tell you they don’t want to eat that ham because it’s pink, but that could very well be what’s going on!

In this article, you’ll learn why some picky eaters only eat one color of food and what you can do to help them eat other colors of the rainbow…

Do All Picky Eaters Only Eat 1 Color of Food?

In fact, it’s usually the more severe picky eaters that notice and select foods based on their color. An extreme picky eater typically eats less than 20-25 foods on a regular basis. They’ll also gag, tantrum, yell, or even throw up if you try to get them to eat, look at, touch, or tolerate a new food on their plate.

Extreme picky eaters also won’t eventually eat a new food if you refuse to give them their favorites. Instead, they’ll go hungry and even make themselves sick. Take the picky eating test to find out if your kid is an extreme picky eater.

Eating only one or a few colors of food is another common trait of the extreme picky eater.

There tends to be one color that most extreme picky eaters gravitate towards: white.

It’s highly unlikely that a picky eater will choose green, red, blue, brown, or purple as the color of food that they’ll consistently eat. Instead, feeding therapists like myself consistently see children that only want foods that are shades of white or beige.

At first, that may seem strange, but there’s actually a few really good reasons why… 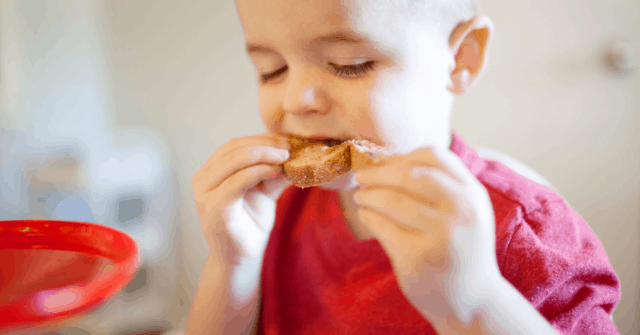 At one point in human history, children needed to have certain defensive mechanisms to survive in the wild. They needed to avoid eating anything poisonous. Green foods in particular are a signal in their child brain that the food might not be safe.

Since white food is void of all color, it naturally looks very safe to them. All this decision making about food color happens on a sub-conscious level for most children.

#2: It’s the color of lots of kid’s favorite foods

Some picky eaters will also branch out into yellow or orang-ish foods like cheese curls, Cheez It’s, yellow cheese, carrots, and traditional mac and cheese. When you think about it, this makes sense, yellow is the most similar color to white.

#3: They trust the color

When a child is struggling with picky eating, it’s for a reason. Eating may be difficult because of different textures of food, it could make their tummy hurt, or be too hard to chew.

Once your child is eating a few white, beige, or even yellow foods, they deem the food safe. Safe that the food won’t feel weird or hurt. Again, probably subconsciously, they identify the color as safe and will be most likely to eat other foods that are the same color, while refusing foods that are a different color. 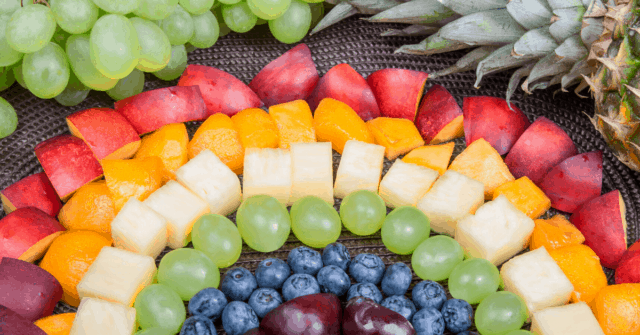 First step is to make a list of the foods your child eats, they may have a few outliers, but do you see a color pattern?

Are they predominantly eating white/beige foods?

If yes, you’ll want to take note of any of those unique instances that they might eat another color. For example, if your picky eater has 15 white foods, but also eats yellow cheese and goldfish crackers, it’s a clue that you can focus on a few other foods that are yellow or orange in color.

In the case of the color yellow or orange, I’d start introducing thin baby carrots on a regular basis. They’ll be way more likely to accept those before a piece of broccoli.

If your child is already eating carrots, think of other orange foods they may not be eating. These other foods don’t necessarily have to be “healthy”. In fact, if you’ve got an extreme picky eater, a baby carrot might be too big of a jump!

You might want to try other types of crackers, breads, and other favorite foods that can be served as yellow first.

What if They Have NO Other Colors of Food?

If they only eat white, then you’re going to start with yellow, orange, or possibly pink, but there aren’t as many many pink food options. You’ll begin with the most subtle color changes in the food you offer them.

Again, offering them some of their favorite types of food now in yellow or orange.

In Jade’s case, her instincts told her that beef was too big of a color leap, so she decided to begin exposing her to another meat: pork. The pork was a little darker in color than the chicken and had some pink tones in it.

This was definitely a more gradual step, that was likely to be more successful.

But, that doesn’t mean that she won’t eventually focus on the pot roast with her daughter, or that she’ll avoid serving it in the meantime.

The key is to make a food plan based on what food colors they’re eating now and which you can strategically begin to offer.

Color Isn’t the Only Consideration You Need to Make…

They’ll often size food up immediately based on color, texture, size, shape, and even smell!

To get some ideas that takes all of these factors into consideration, check out these 27 foods for picky eaters!

And, grab a Free Printable Meal Ideas for Picky Eaters for some inspiration. Click here and we’ll send it to your inbox. You can download, save, and print.

Join Me for the Live Video

Will Your Child Outgrow Picky Eating: The Surprising Truth

The BEST Strategy for Picky Eating

10 Extreme Picky Eating Red Flags that You Need to Know