How to Stop Short Order Cooking for Your Kid

Ever feel stuck making multiple meals for your family, but don’t know how to get out of it? Learn how to stop short order cooking for your kid, even if they’re a picky eater with these 5 simple steps! 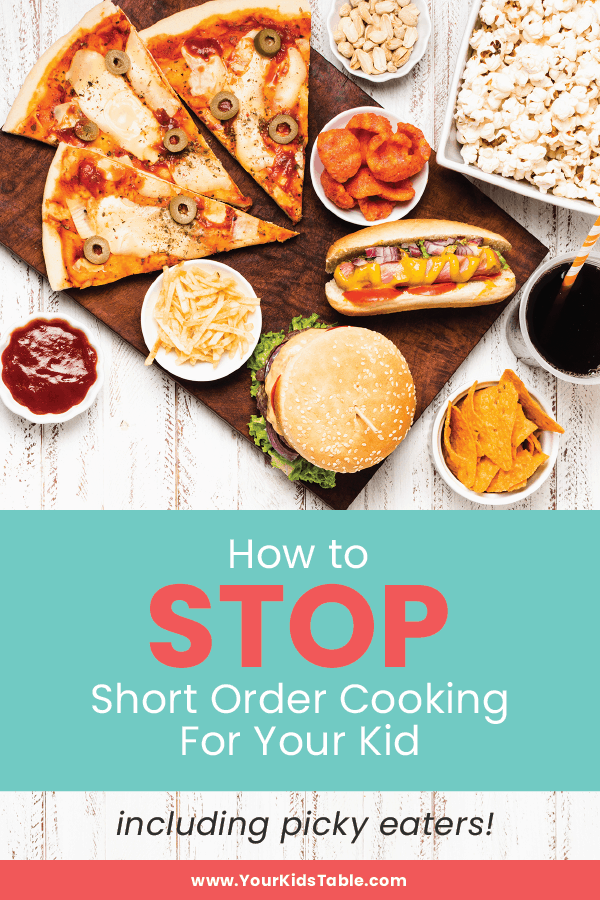 One for this child.

One for the parents.

One for the baby.

One for the picky eater who hates veggies and casseroles.

You get the point. Sometimes parents short order cook because it seems to be the easiest way to keep the peace, and sometimes it’s because of the logistics of different schedules.

But, as a feeding therapist, I can tell you that there’s a danger to short order cooking, especially for picky eaters.

What is Short Order Cooking?

Short order cooking means cooking different meals for everyone. It’s the opposite of a family meal where everyone sits down together and eats the same thing.

The term comes from a cook in a restaurant or diner that takes individual orders and prepares them.

Why is Short Order Cooking Not-Recommended?

Short order cooking isn’t recommended because children often aren’t exposed to different foods. While parents may ask their children, “would you like some of my chicken or carrots?”  A child is almost guaranteed to say no when they’re sitting with their grilled cheese and fries in front of them.

Serving food in this way makes it very difficult for a child to get comfortable enough with new or different foods to experiment with touching, tasting, or eating them.

It’s also very easy to slip into only serving the same foods again and again because you’ll likely tell yourself, “Why bother giving them a few carrots, they won’t eat them anyways.” 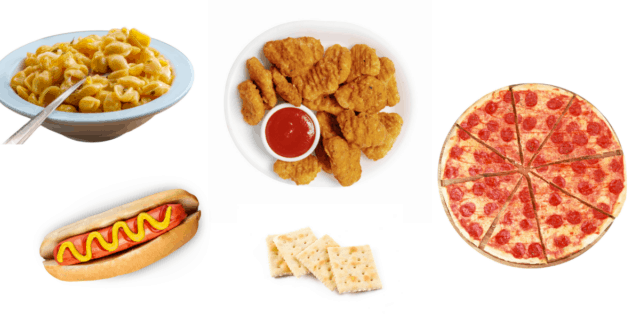 What if You’re Stuck Short Order Cooking for a Picky Eater?

Since most kids go through a development phase of picky eating between 1 and 4, short order cooking can cause deeper picky eating roots to take hold. Once a child is a picky eater or an extreme picky eater that has less than 25 foods in their diet, then moving towards family style meals becomes even more critical.

Because the picky eater refuses and is uncomfortable around new foods, they’re far less likely to ever consider trying one from across the table on another family members plate. Short order cooking also reinforces the idea in the picky eaters mind that they have their food and everyone has their food.

They will continue to categorize foods into these two categories: my food and their food, instead of seeing all food as an option to eat. Breaking down this mental barrier is an important step for picky eaters to learn how to eat new foods.

How to Stop Short Order Cooking

Maybe I’m not telling you anything new, or maybe I’ve convinced you that short order cooking has to go, but you have no idea how to make that a reality. You’re thinking of the tantrums, arguing, and battles that are going to ensue if you just plop down chicken soup in front of everybody tonight for dinner.

You’d be right about that because it’s probably what would happen if you try that with a picky eater at the table. 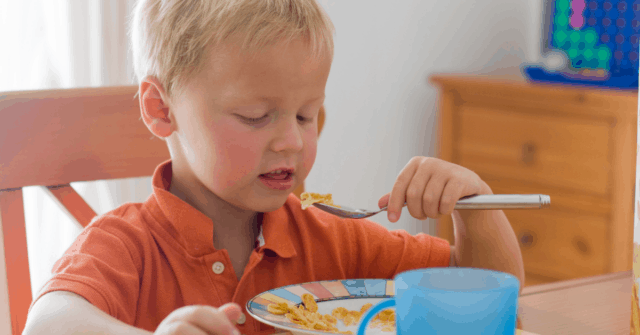 #1. Make a list of all the foods your child eats at least half the time

Parents usually get overwhelmed thinking of something everyone could eat. It might take some creativity and an odd mash up of foods being served, but that doesn’t matter. The point is that your child sees the meal as a family one, and not a meal where they have their own different food.

To get started, make a list of everything your child typically eats. Don’t include the mashed potatoes they tried that one time, not that you shouldn’t serve those again, but that’s not a food you can count on them eating.

Include snack foods on this list too, any foods count. Fruits, veggies, desserts, list all of it as long as they eat it most of the time.

#2. Plan your meal to include at least one of the foods

Next, you’re going to use that list to include 1-3 of those foods in your next family style meal. Think of them as sides. If your child eats chicken nuggets, cheese sticks, sliced green apples, chips, crackers, garlic bread, and croutons, you’re going to serve one of them at the meal you’re planning.

It doesn’t matter if you’re having lasagna with a side of croutons.

It doesn’t matter if your child eats 2 cups of croutons and doesn’t touch the lasagna.

They probably won’t be able to begin working on eating the lasagna until they’ve settled into a new family style routine, there’s no pressure while eating, and possibly the help of some other strategies.

We have to start with baby steps when kids aren’t used to having family style meals or are very picky eaters and are scared of new or different foods. This begins to break down the black and white thinking of my food – their food.

I know this opens up a ton of other questions. Here are a few guides to help you:

3. Tell your child about the change in advance

If your child is used to short order cooking and you suddenly refuse to not make their favorite chicken nuggets, biscuit, and applesauce that they eat every night, they might have an epic meltdown when they come to the table and see the big surprise.

Tell your child that morning, or a few days ahead of time that you’ll be trying out a different way to eat together, BUT you’ll have the chicken nuggets they usually eat (or whatever food you’ve picked from step 1) at the table too.

Choose a time to talk about this when your child is calm. Before nap or right when they get home from school probably aren’t the best times. 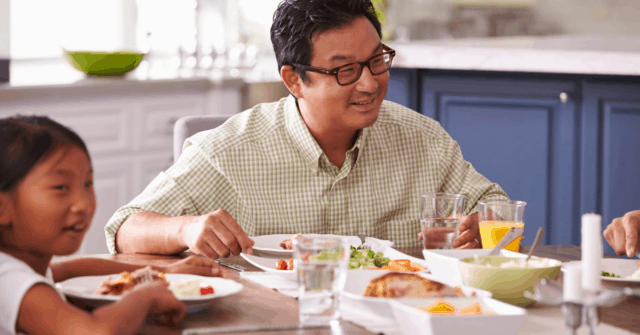 4. Don’t pressure them to eat the other foods

Part of the reason kids get upset that you’re not short order cooking is because they don’t want to eat the other foods at the table. Picky eaters may have major anxiety about it if they know what types of food you usually eat.

To ease their concerns, you need to tell them that they can choose to eat whatever they want at the table. A good practice to get into is that they serve themselves a small serving of all the foods, if they can tolerate that, some picky eaters won’t be able to. Reinforce that it’s their choice and avoid any coaxing or prodding so they can trust you on your word.

If not making kids eat new or different foods at a meal doesn’t make any sense to you, then check out The Best Picky Eating Strategy, you’ll learn why not pressuring is critical to kids actually trying and liking new foods.

5. Be consistent, even if they flip out

Short order cooking doesn’t have to happen overnight. If any of this seems overwhelming, you could start with “Sunday Night Family Dinner” for a few weeks and then move to “Family Dinner Weekend” and so on. Choose how often you’re comfortable with and steadily work towards all or most of your meals being 1 set of foods for all.

However often you choose to have family style meals, be consistent. Make a commitment to yourself. Write it down, tell your spouse or your partner, and make it happen.

But, be prepared for some backlash. Younger children may tantrum, even if you’ve warned them. Older kids may mouth off or complain. The consistency AND reminding them that they don’t have to eat anything they don’t want to will go a long way. Usually after a few meals, they settle into the routine and that opens the door for learning to enjoy other foods.

To get more tips to help your child eat as well as possible, grab our free printable: How to Raise a Healthy Eater

The Best Eating Habits for Kids