Cooking with Your Kid: Quiche, Made Your Way - Your Kid's Table

Cooking with Your Kid: Quiche, Made Your Way Quiche is a perfect, light, summer dish that is very forgiving and versatile. I love to cook anything that requires you to throw everything into one pot or bowl and stir. Also, you can serve it up for breakfast, lunch, or dinner and it reheats well for leftovers. We had it for dinner last night and I knew it was a bit risky for my kids. Sam always needs some encouragement to eat some of his scrambled eggs (quiche is basically scrambled eggs in a pie shell) and Isaac has refused eggs several times all together. I did serve it with fruit, so they would have a preferred food, and I knew they would gobble up the crust (who can blame them). I added a seasonal ingredient, fresh from my mother’s garden, swiss chard, alongside a diced tomato! I know I may be losing some of you here, swiss chard, for kids? Yes! I really feel strongly that there doesn’t have to be “kid foods”. Our little ones are capable of eating more than pizza, chicken nuggets, and fries…BUT only if we give them the opportunity to. I will admit that I was really pushing the envelope with the swiss chard, but I took a few precautions to give the boys the best chance of eating and enjoying our quiche. Read on to see how I approached success at our dinner table, as well as the recipe for this yummy dish!
The first step was getting Sam to help me cook, which is never a problem. As I have stated in previous posts, kids often feel invested in the meal when they help prepare it. I had even more motivation last night though because I wanted him to interact with the swiss chard, so I had him help me chop it up. Now, I have him touching this new food! Next we smelled it, which also helps children feel more comfortable with new foods. Smelling a food also gets it up close to their face, you know by their mouth, where we ultimately want them to put it. I made sure to chop it up very small. No, not to hide the food in the quiche, but to keep the taste from being to overwhelming in one bite or risking a long stringy piece that the baby could choke on. Also, Sam may have passed on the food altogether if he got a big piece because that texture can be overwhelming for him. Not to say that I won’t eventually use larger pieces, but I will work them up to this. Once all the food was chopped up, I asked Sam to scoop it up off the cutting board with his hands into the pot (little pieces of it got stuck all over his hands). He made a few comments about his hands being dirty, which I acknowledged but didn’t dwell on. I gave him a wet paper towel to wash his own hands off. Lastly, I sauteed the  greens in olive oil and chicken stock to mellow the flavor.

While the quiche was cooking I turned the oven light on so he could occasionally take a peek and he stood at a safe distance while I pulled it out of the oven. I was trying to keep him involved in the whole process. I decided to give Sam a whole slice (as opposed to chopping it up in a bowl for him) and showed him how to use the side of his fork to cut it. I was hoping this independence would spur his eating on even more. He was excited, telling his Dad, “I made this quiche!”  He took 3-4 bites, eating well, and then stopped. Sam asked, “Can I have more crust?”  He had eaten all of his off the top. I told him, there was crust on the bottom of his quiche. He calmly said, “I want more of the top part.”  To which I replied, “Maybe once you have some more of the quiche.”  Sam said nothing and started playing with his utensils. I let this go on for a while, since I was dealing with Isaac (I’ll get to him in a minute). I realized Sam was stuck in a rut and may not eat any more quiche. I wanted to change things up a little to get him interested again. I looked at his plate and saw that I had given him too large of a piece. I took some off and said, “I think we have too much on here.”  Then I coarsely chopped the rest up for him and loaded up another bite onto his fork. I laid it down so he could feed himself. He took the bite and I gave him some praise, letting him know how happy I was that he was eating some more. We took a few bites together and he ate what I felt was a good portion for him. It wasn’t his best, but he did okay. I didn’t encourage him to eat all of it because I want him to recognize his own hunger cues and respect that he had already pushed himself a little.

Now, Isaac is a whole different story. He is having a lot of trouble eating a large quantity or variety of foods. We are making progress, but it is slow. I knew he would finger feed broken up pieces of the crust so I started with that. For Isaac, he needs to see and begin eating something he enjoys before he tries something foreign and non-preferred. This is something I have learned through trial and error over the last few weeks. Once he had started on that I tried to fork feed small bites of the bottom of the quiche to him. My thought was he will get some crust and some egg. Then, I would work up to bigger pieces of just egg. That plan fell flat, despite my best efforts. I tried to stay calm, but was getting very frustrated with the constant batting away of my hand approaching his mouth! I put some small bite sized pieces right onto his tray in hopes he would start to finger feed them himself. He wasn’t. Now, he was starting to get fussy and I was officially frustrated. I took a breath and turned away to talk to Sam. A minute later, my husband said, “Hey, he’s eating the quiche.”  I was elated that he was even trying it. He continued on to eat a small portion, then allowing me to put small pieces into his mouth along with him feeding himself. My husband kept small pieces coming on his tray and I made sure to say “yeah” and clap for the bites he was taking. He didn’t eat what I would consider a lot, but he ate a lot for him! That’s all I can ask for.

The point here isn’t to share every detail of my dinner, but to get you thinking about ways you can increase the variety of foods your kid eats. Also, this isn’t as cumbersome as it sounds. Being aware of challenges you may face and being armed with small tricks will allow you to manage meals better. Most of the interactions I described only took a few minutes. I hope this gives you some food for thought. Are you inspired to try something new with your kid?

Alright, on with the recipe! You really have a lot of room to play around with quiche. It can be made with 4-6 eggs and a large variety of veggies and proteins taste great. I used swiss chard, tomato, and mozzarella/parmesan cheese (wish it had been goat cheese) because it is what I had on hand. I really liked this combination and will definitely make it again. Be creative and try some new combinations. 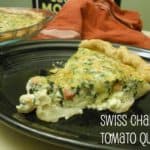 Quiche, Made Your Way

Overall, I think this was a success at my kid’s table, I made sure to make something that was more preferred for both of them tonight for dinner. Let me know what quiche you are going to try!