It is Memorial Day Weekend and while we pause to remember the brave men and women that have honored our country, we naturally want to eat that which symbolizes Americana. Cornbread, is one of the first things that comes to mind. Of course, I wanted to up the nutritional value, and with fresh blueberries purchased at the farmer’s market, I was inspired!
Now that Isaac is nearly 10 months old, I am really starting to move him onto table foods and many of our meals are revolving around what he can eat with us. Soft fruits and vegetables, and  breads and muffins (i.e. zucchini bread, banana muffins, etc.) are perfect transition foods for your baby, once they are chewing and managing  soft melt-able foods well. I wanted Isaac to be able to eat small pieces of cornbread with us, so I pureed the blueberry’s before mixing them in. By doing that, he wouldn’t get any large unexpected chunks that he could potentially choke on. If you aren’t feeding a baby, you could place whole or chopped berries into the bread, but the puree makes the bread sweeter and also looks very pretty.
I’m happy to report that it worked wonderfully well as a recipe. I had never heard of blueberry cornbread and thought naively that I had a novel idea. I can hear some of you laughing now, obviously, as my Google searched proved, this is not a novel idea. However, I didn’t see anything with a puree in it, which is perfect for a baby and is just as good for the big kids and adults. I do have to admit that this wasn’t a big hit with Isaac, in fact it wasn’t a hit at all. He is just coming off of a bad stomach virus and is slowly getting back into eating. Cornbread is a little coarse by nature and crumbles everywhere, so Isaac was a little overwhelmed by the texture  It was very frustrating to go through the trouble and have him not eat it, but I have to remind myself that teaching a child to eat is a process! I still think cornbread is a great idea and I will try it with him again soon, maybe with some melted butter on it. Yes, try and try at least 12 times applies to babies, too!

As far as Sam was concerned I didn’t want to “trick” him with the puree, which would have been hard to do anyways with the sharp contrast in colors. He was busy in his sandbox and not interested in helping me make these, so I made sure to point out that the corn bread had blueberries in it, especially because blueberries are really hit or miss with him. He loves most anything related to bread and gobbled them up. Again, because he liked them so much I highlighted how good the blueberries were that were in the bread. If you think your kid might pass on them definitely try to get them involved in cooking these with you. I made my cornbread in a mini-muffin tin and a  kid-tray of larger insect shaped muffins (see above). I knew Sam would love eating a butterfly so I did this just for fun, don’t feel like you need to purchase something like this. Although, this could be a great hook to get your kid to try something they normally wouldn’t.
Blueberry Cornbread
adapted from food.com 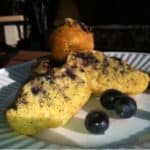 Some Tips on Improving Your Kid’s Eating:

There were a few things that I think made this experience really successful:  I was giving him my full attention, we ate it together, and I remained calm. I was prepared to be disappointed, but not discouraged!

The example above is just one example. My hope is that you get the idea of what I was doing and adapt it to your situation with your kid!
Enjoy the grilling, swimming, and hopefully blueberry cornbread. Happy Memorial Day!